How to Describe a Graph Trend in IELTS Task 1

If you have to do a graph question in IELTS Task 1 then describing a trend or two is going to be vital if you want a good answer - here is a checklist to make sure you can be prepared!

The best way to describe any graphical trend is to see each major phase in its simplest form:

We will look at each of these areas in turn, before finishing with some complete examples at the end.

But before we even start I think you should remember that you will not need to mention all 6 of these features in an IELTS Task 1 question! Don't panic!

What you will need to do is to be able to see these features and choose which ones are worth highlighting to the reader.

Typically you will be aiming to write a single short sentence about the trend (using a couple of the characteristics here) and move on.

Let’s begin with a description and examples for each possible parameter of a trend. [If you would like more examples of language, have a look at the graph phrase bank here.] Be practical when you revise for the exam, choose a handful of verbs and nouns and use them correctly. 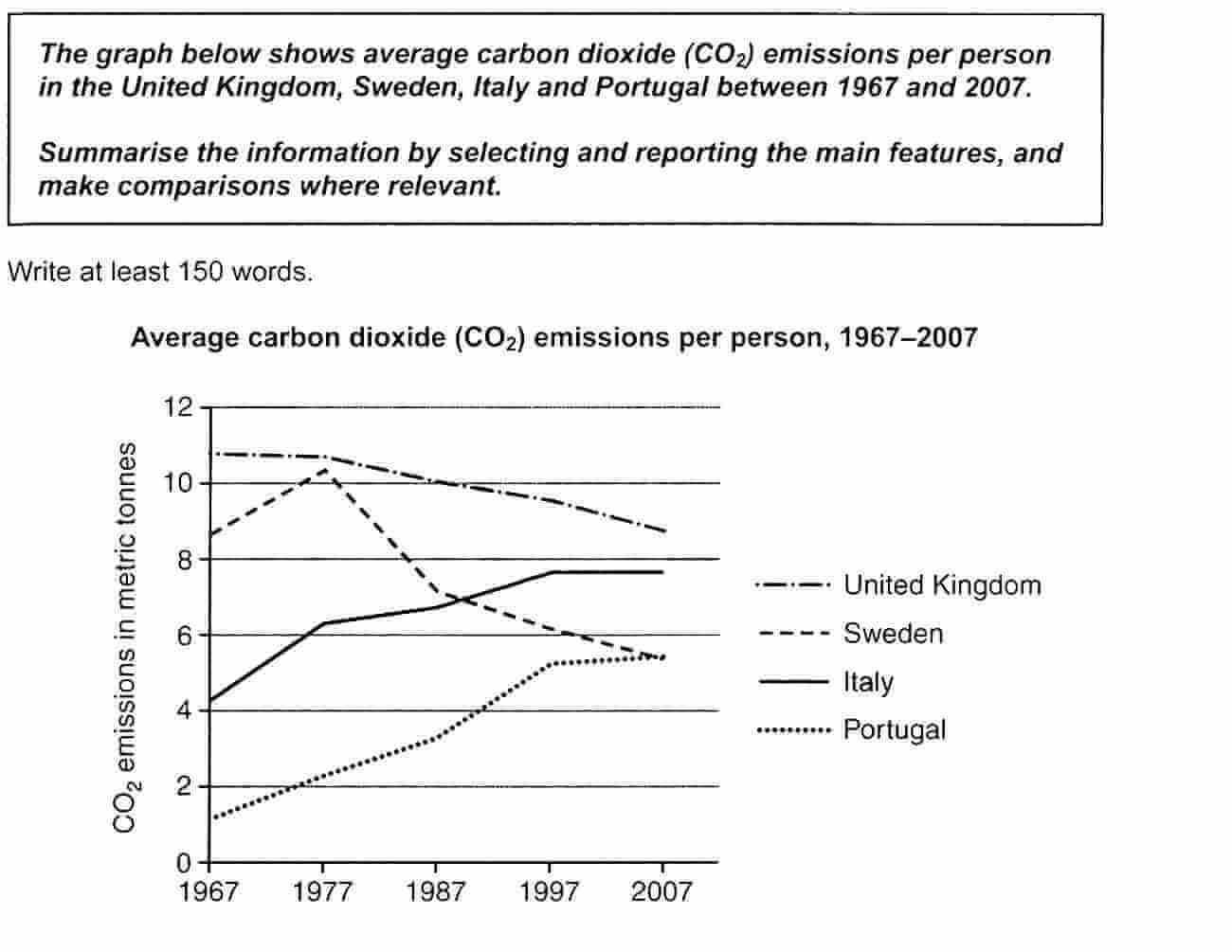 The most basic information we can give about a graph trend is the time it lasts and the overall quantity of change.

How to Describe the Length of a Trend

Here we are giving information about the total time period of the trend. This is the ‘distance’ along the X (or Horizontal) axis.

There are two main structures here:

Normally the line graphs are in the past. If a trend continues until now you will need the Present Perfect (probably Continuous because you are stressing a trend, an activity).


How to Describe the Total Change of a Trend

Here we are giving information about the change in ‘quantity’. This is the ‘distance’ on the Y or Vertical axis.

The time frame can also be stated after the main phrase;

Using the VERB, the time frame can also be before or after:

How to Describe the Direction of a Trend

There are two main options here. We can use words like DOWN and UP, or DOWNWARDS or UPWORDS, for example.

We need these words because the verbs are neutral: go, move, change etc.

But I do not recommend this style.

Instead in English we really appreciate when we make the verb do lots of the work. So choose a verb which does a lot of work!

[For more useful verbs and other phrases see the phrase bank on Graphs.]

How to Describe the Speed of a Trend

When we talk about speed of a trend we are basically just talking about adding an adverb!

This is a truly powerful part of the description of a trend because it means we are finally turning data into information. The choice of adverb will mean the reader’s attention is drawn to what the data MEANS not just what it says.

attention is drawn to: here the reader will look at / focus on...

Think about these phrases:

'Steadily' and 'dramatically' really communicate a lot of information. One way I like to envisage the IELTS Task 1 questions is that you are describing some data to someone who cannot actually see the data; so you need to use language which is truly descriptive in order to communicate the data properly.

Finally, let’s have a look at some more sophisticated descriptions, namely variation and momentum.


How to Describe the Variation within a Trend


This is when we want to highlight that the trend was constant or not constant during the period.

If we want to stress that a trend was fairly steady we would use an adverb that includes that concept, for example:


Now let's look at our second example IELTS Task 1 question: [These questions are copyrighted to Cambridge University Press and are being used for educational purposes.] 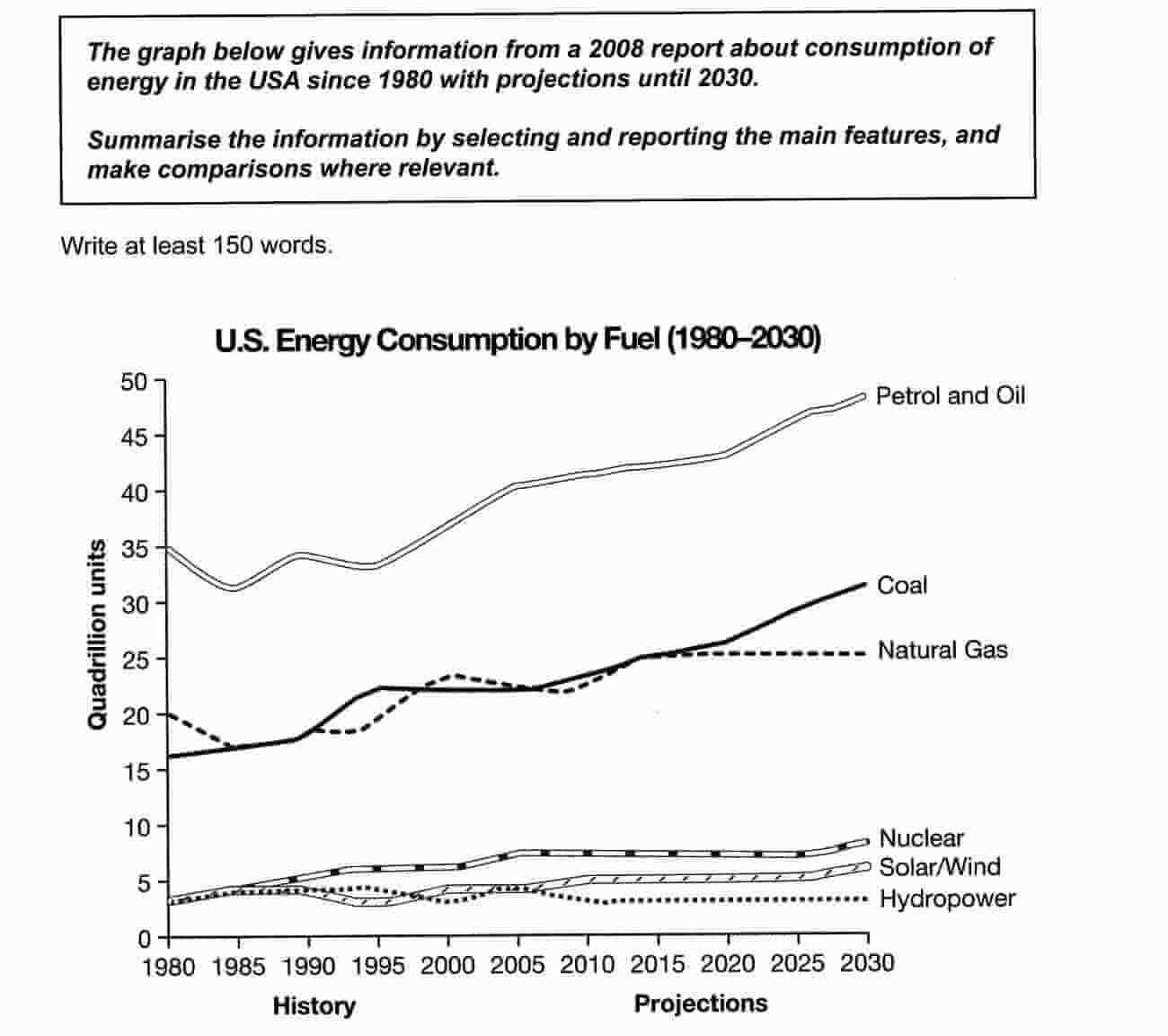 What if we want to describe the trends here? There are a lot of movements within the different multiple lines! This would be difficult to describe completely. So remember, in IELTS we need to be very choosy and concise with our descriptions.

I think the two strategies are to use the verb To Fluctuate, or a semi-fixed expression such as “While X did occasionally fall the general trend was upwards”.

EXAM TIP: In order to decide what tenses to use in your answer pay attention to any dates in the question. However, this question in particular is very difficult because of the use of past and future data. There are two possible options here, if you describe the lines as the subjects then you could use the Present Tense. Another option would be to describe the lines from the end point (the future) and so as a prediction (so 'will'). I will give examples of both options below.

So some possible options here would be:


How to Describe the Momentum of a Trend


Finally let’s look at trying to communicate a change in speed within a graph line.

Two common expressions are ‘slowing down’ and ‘speeding up’, often used after BEFORE.

Let’s take the example of Portugal (from example 1):

Here the slowing down does not mean it decreased, just that the amount of rising slowed down.

(*its opposite 'decelerating' is slightly less common


Some Examples of Describing a Complete Trend


Finally my own take on possible descriptions for the two exam questions we looked at today.

(Because of the nature of these two particular questions I will have to be super brief, if the graph in the exam question only had a single line or two you should of course give more details!)

Over the period 1967 to 2007 we can see that emissions in the UK decreased steadily while in Sweden they rose until 1977 before falling dramatically. Conversely, the general trend in Italy and Portugal has been a consistent rise, although from 1997 the emissions have tailed off.**

**Note that for the exam I would now add some data points to the general trend description, for example:

...in the UK decreased steadily from nearly 11 metric tonnes to less than 9, while in Sweden they… etc

Again this is only to highlight the trends, you will need to add data points! In this answer I am using 'will' (for prediction) because rather than describe the trend as it changes I am describing if from the end of the graph line (the future). But the Present Tense is also possible, as I showed earlier.

The graph shows that in the period 1980 to 2030 there will be a general increase in energy consumption, Petrol and Oil usage will increase dramatically, and there will be a steady rise in the consumption of Coal, Natural Gas, Nuclear and Solar/Wind, while only Hydropower will not increase but rather will fluctuate around the same level (over the period).

[For more information on how to more fully start an answer to a Task 1 Question see this blog post, here.]

I hope that was helpful!
Good luck in the exam!
Adam

Check out: How to Compare 2 Graphs or Charts in IELTS Task 1

Check out: How to Use Connectors in IELTS Writing Task 1