A Template for Answering IELTS Task 1

Of the 2 questions in the IELTS writing exam, Task 1 requires the student to be less creative, even formulaic with their answer.

Approaching Task 1 with a definite methodology is going to save you time, create less stress and less anxiety - as well as improve your score!

formulaic: to have the quality of following a formula (eg: 2y + t = q)

A Task 1 answer should fall into two main parts:

Exam Tip: Note a conclusion is NOT needed, especially given the time constraints. This is because you are not giving an opinion, or trying to find a compromise (as in Task 2) or even aiming to make a single main point.

(A conclusion is different than a summary and you could argue that Task 1 as a whole is basically a summary!)

Let’s go through each phase and offer some examples with exam questions.

Phase 1: An Introduction to the Visual Data

If there is a single data source, or multiple sources which can be grouped, I recommend a simple opening sentence such as:

See examples for actual IELTS questions given below!

If there two multiple data sources which cannot be grouped, I would simply list each:

I would be surprised if there are more than two multiple data sources which cannot be grouped, but if that were the case I would aim to use a generic description of all the data.

The three sets of data present information on the various aspects of technology use in Western Europe over the last twenty years. 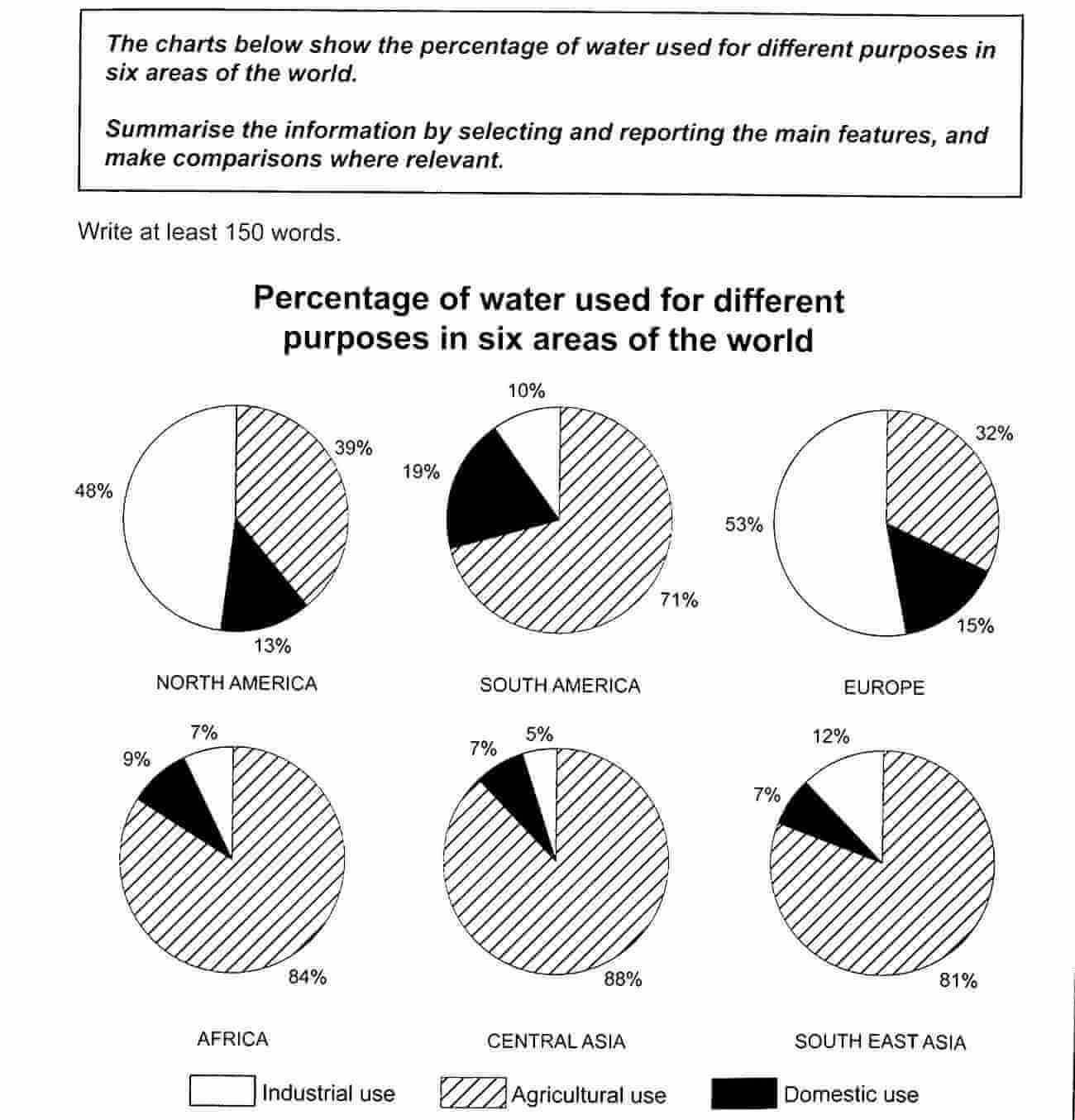 The six pie charts show the usage of water in percentages for six large areas around the world. 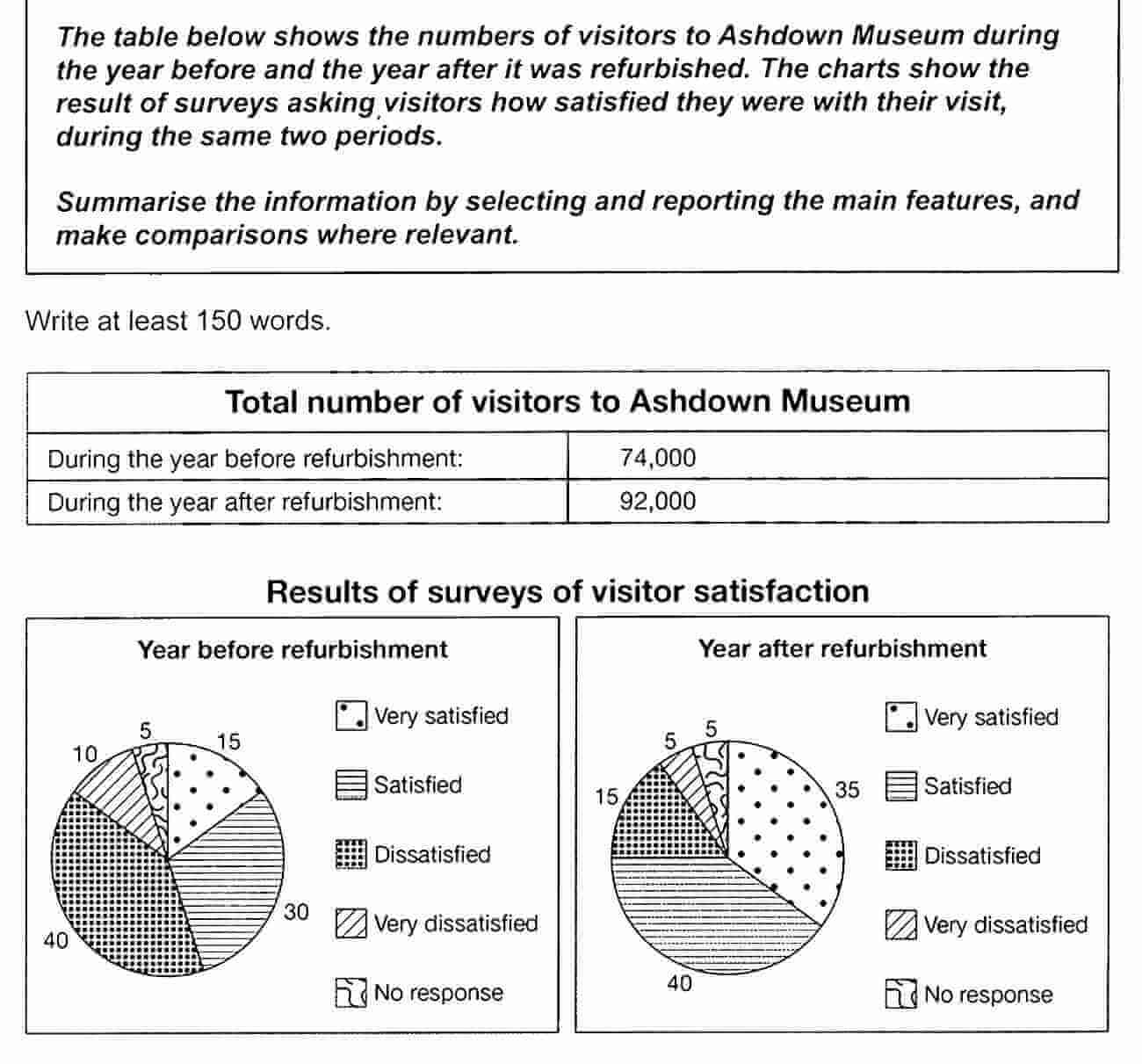 The table shows the change in number of visitors to Ashdown Museum while the pie charts present data on customer satisfaction to the museum before and after a redecoration.

Exam Tip: Ideally you should not use language given to you in the question in your answer. But do not overthink this, it is not punished it is just that you are not credited for it. Sometimes there is only one way to describe something properly, it is better to simply use what comes to you quickly and move on. However, do try and rephrase the titles at least a little!

overthink:to think too much about something, often where you start to waste your time/energy 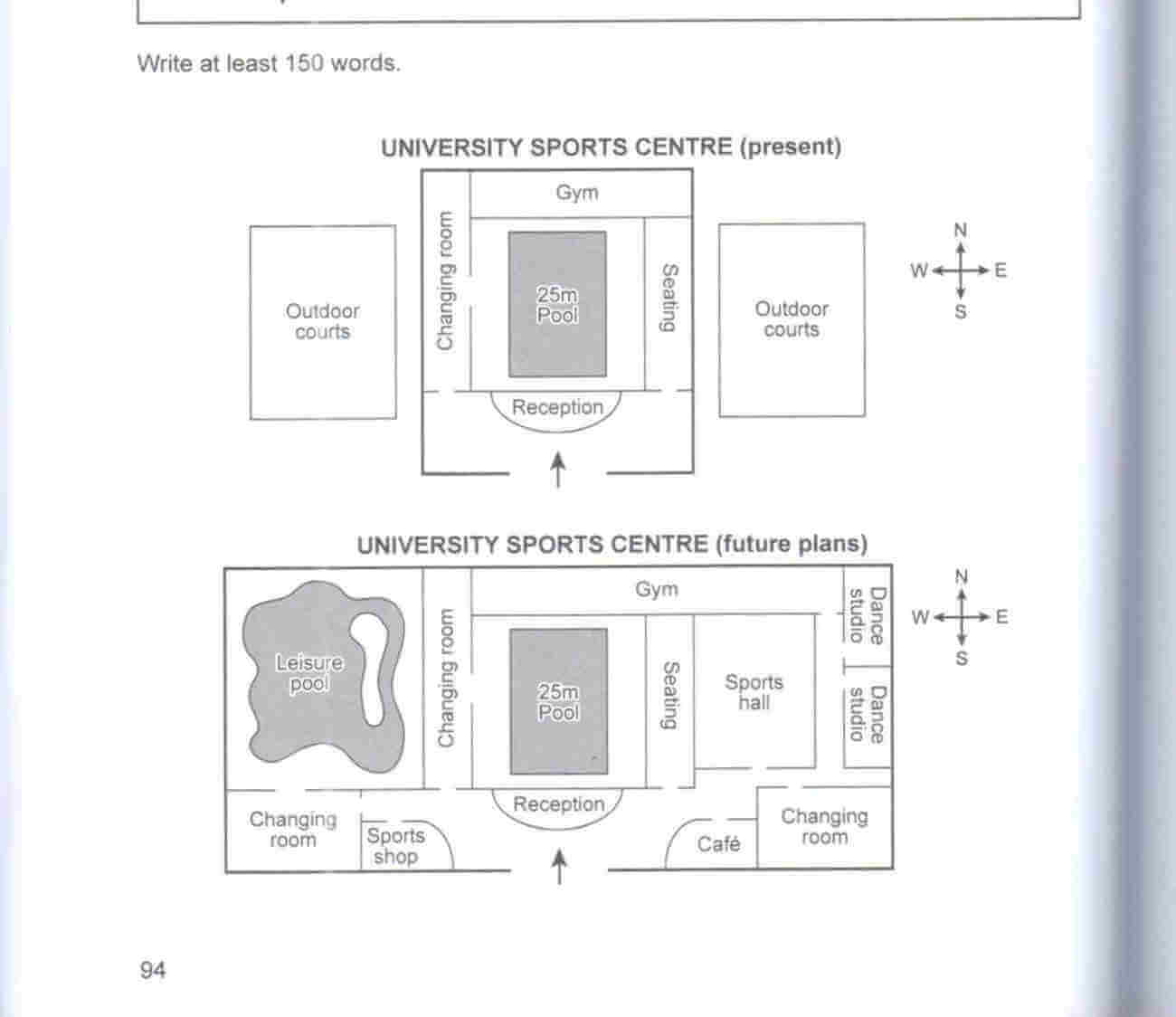 The two maps show the changes to the university sports centre between its current status and the planned rebuild in the future. 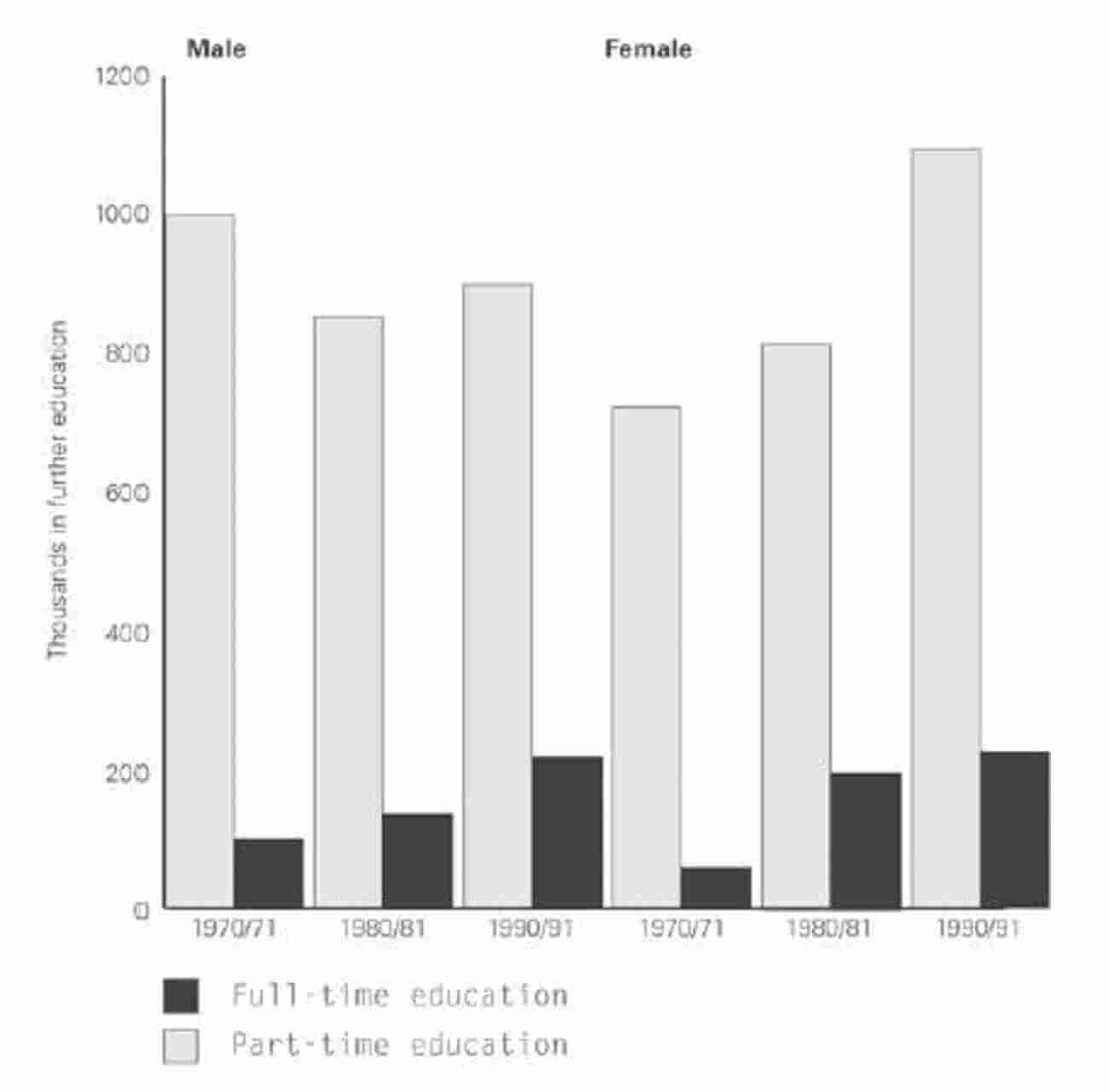 The graph shows the numbers of men and women in either full time or part-time study at three separate points over 20 years.


Phase 2: A Summary of the Principal Information in the Data

The next step is to give a simplified overview of the data.

Here ideally you will not be using any data points but rather a kind of fuzzy, or out of focus, view of the the data sources.

Think about it as if you are asking yourself “What is the big thing to say here?”

So going back to the four examples:

We can see from the data that the six regions fall into 2 categories, either agricultural use is by far the biggest usage or it is a combination of farming and manufacturing that uses the vast majority.

Exam Tip: It is interesting to remember that irrespective of the question, you are required to write about the same number of words (175 is a good target) for an answer. This means that each question requires a different balance of content, for example, often when there are multiple data sources you will need to focus on clear structuring but less description, while with a single data source you will probably need less structuring and more description. Just bear that in mind and don’t be stressed by a wall of data!

We can see from the information that both the number of visitors and general level of satisfaction increased after the changes were made.

We can see from the information that the present sports centre will remain almost as it is but that the outside areas will be converted to indoors and more facilities will be added.

[If you would like a more detailed approach to starting a Task 1 question I wrote a blog post about how to start a graph question here.]

So now we come to the real meat and potatoes of the Task 1 answer.

Again, we want to arrive with a clear objective and not waste time in deciding how to handle the data.

I want to focus here on, not what we actually say but, how we might group the data.

[If you would like more phrases on how to use connectors in IELTS Task 1 I wrote a blog post here.]

So, there are two possible approaches:

Option 1, go through data sets individually (eg each line, or each category, or each data source if there are multiple) and then aim to compare them in terms of similarity and contrast.

Option 2, group data into mini-groups that share characteristics, and then compare and contrast between the different groups.

There is no definite answer here. However, I would ‘aim’ to not describe more than 4 ‘things’. Probably less.

For example, if there are a lot of data sources (lines, pie charts, table numbers etc) you will need to simplify into easily identifiable groups. Clear organization is key here.

And if there are few data sources you have to remember that you will need to describe them more fully, so good description and comparison become key here.

The exercise I want to do here is to look again at the four sample papers, and chose the following three things…

What I want you to focus on here is not the language but how you approach the choice of organizing the data description and comparisons. Remember:

So to force you to do this step properly... I will not be giving you language examples (actual answers) – just examples of what to look for BEFORE you write!


Exam Tip: Once you have grouped the data like this, then describe each grouping before describing at least one similarity and one contrast within the data. This will give you a great chance to show off some more complicated language.

Exam Tip: When you get to write your answer the similarities and contrasts do not necessarily have to come at the end after describing the data points. You can use the language of similarity and contrast to even introduce the groups. “While in contrast...” etc.

OK, great! Now that you have a template of how you are going to answer the question it’s time to actually do the writing…. Have a look at some of my other posts on how to approach the actual writing!

Check out: How to Use Connectors in IELTS Writing Task 1

Check out: How to Compare 2 Graphs or Charts in IELTS Task 1

Check out: How to Describe a Graph Trend in IELTS Task 1