How to Use Connectors in IELTS Writing Task 1

The 2 general rules to apply when wanting to use more connectors are simply:


Sounds easy… and it is!

NOTE: Connecting language does not necessarily mean making longer sentences, it can mean just connecting your logic, or the flow of your argument.

So, for example, many times connecting language can appear at the beginning of sentences, like this one!


The most common Argument Connectors to use in IELTS Task 1 are:

to switch: (here) to change/move from one thing to another

The most common Logical Connectors to use in IELTS Task 1 are:

EXAM TIP
Some types of connecting language will not normally be used in Task 1 because they are used in more subjective or argumentative writing, for example giving reasons, or consequences, or hypothesizing. These are much more common in Task 2.

Imagine when you are trying to communicate information that you do not know where the other person is looking or thinking, so you must be very clear about your logic, otherwise they may get confused.

A great way to view the use of connecting language is what I call ‘Driving the Bus’.

When you are explaining something, imagine you are driving a big yellow school bus, now every time you turn, or accelerate, or want to stop, you should tell people before you do it. If you don’t, they might fall off their seats!


Of all the 9 types of connecting language I think there are FOUR, in particular, that students MUST USE in the writing task 1. Learn examples in each of these and make sure you incorporate them into your answer!

There are two types of structural connectors that will be common in IELTS Task 1. Introduce & Particularization.

Look to introduce and move between subjects being discussed smoothly:

smoothly:(here) in a way that is natural and easy

State clearly what you are talking about:

“Looking first at the graph we can see…..
“From the first diagram it can be observed that…

And state when you change focus:

“And in regards to the second graph...
“While if we compare this to the information about X...

As well as choosing general trends to describe, consider isolating a couple of the most important data points in the question material.

You can do this by focusing on data that is especially large or unique, and I recommend particularization here:

You can also do this by finding shared features, and I recommend exemplification here:

“The two processes are quite different, however, they do share some common features, for example they are about exam testing and they both…
“The two pie charts have some shared characteristics, for example, in both sets of data women are...

Once again we are 'driving the bus' here, and we really must make sure that we help the reader to understand what we are trying to describe.

EXAM TIP
Yes, the IELTS Task 1 is a ‘dry’ task, but that does not mean you just have to repeat the data. Try and make information out of the data.

For example, “John is 9 and Mary is 8” is data. Perhaps more informative is “John who is 9 is one year older than Mary.” This is obvious, but still, you have made a simple relationship between the data points and this makes it 'comprehensible'.
dry:(here) direct, plain, uninteresting, not exciting

The two main connecting ideas that I think all students should include are similarity and contrast.

Find a general trend, feature or data grouping that shows some similarity, and then, caveat that with a contrast!

caveat:(here) a proviso, a condition, a note, a limitation

It can be very efficient and effective to succinctly group data as similar in some way, and, it can be great to also show how they are not completely the same.

succinctly:(here) in as few words as possible

“Both graphs increased gradually over the period however the sales figures did not fluctuate at all unlike the marketing results.
"The data for the two countries is very similar however in country A all of the outdoor activities were less common.

And then try and do the opposite! Find a general trend, feature or data grouping that shows some contrast and then caveat that with a similarity!

The idea here is the same. By grouping, and then highlighting, a lot of information can be communicated effectively!

“The contrast in data between leaving age and health is very large, but similarly they both show an acceleration of change in recent years...
“The pie chart data between 1980 and 2015 are almost complete opposites but they similarly share a common feature of having two categories that have most of the percentage share between them….

NEXT we will look at two more scenarios that could be in the data presented to you, they are specifically to do with the passage of time.

Time Sequences or Processes in Task 1

The 2 most common examples of this are:


For example:
[These questions are copyrighted to Cambridge University Press and are being used for educational purposes.] 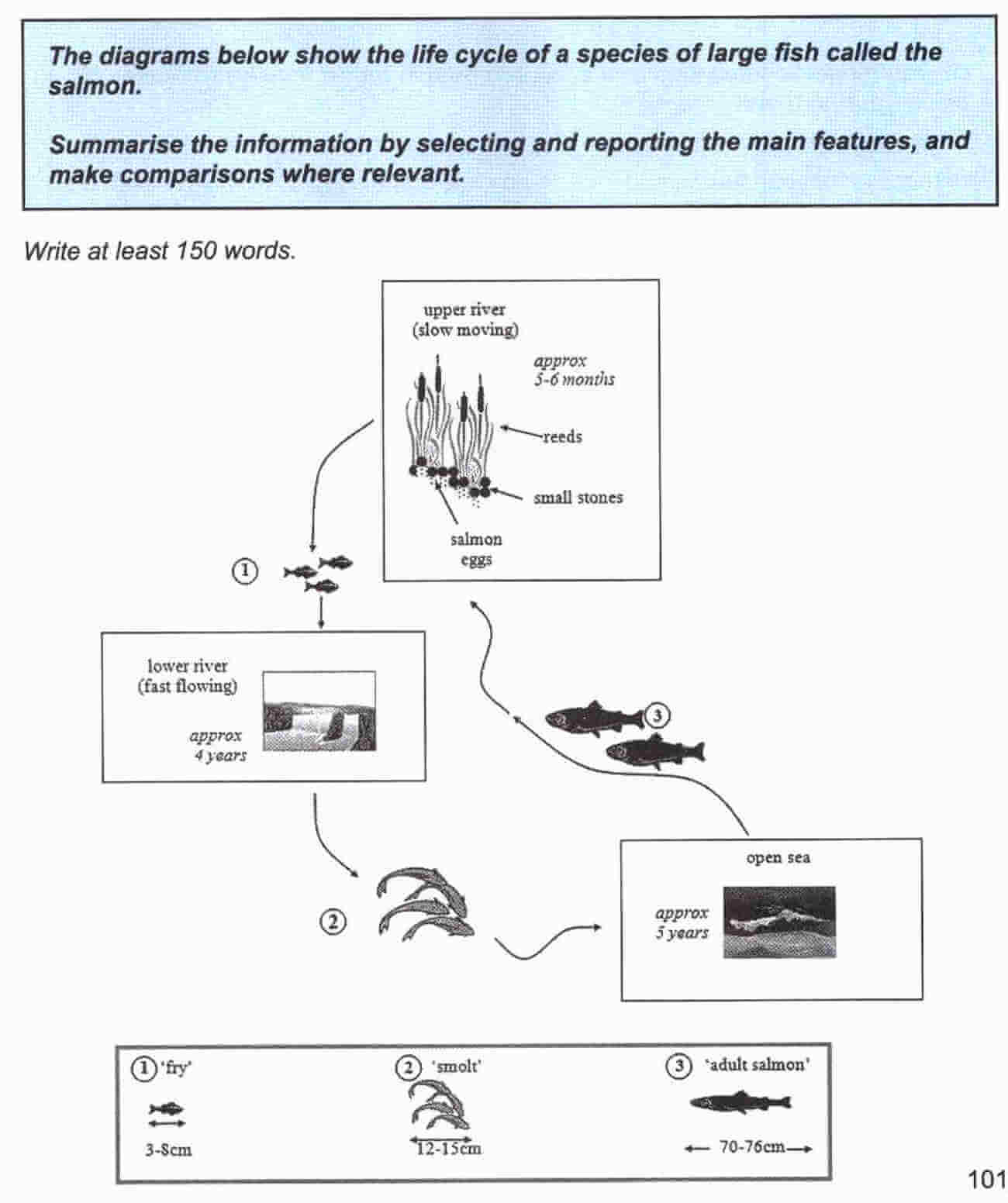 But this is possible in other data questions if there are numerous changes over time, for example a series of pie charts or bar charts.

Here the language could be:

“At the beginning of the process… then… after that… finally...”
“Initially… before rising/becoming… and then subsequently… until eventually”

With processes and flows there may also be a division of a process, use EITHER, OR.

The life cycle of Salmon can be said to begin when they are ‘fry’ where…. And after a period of about 4 years they… then subsequently they move on after approximately 5 years… eventually reaching the upper river…. Before finally the new ‘fry’ arrive once again at...

The second most common scenario for time is BEFORE and AFTER.

Before and After in Task 1

This is very common in maps, but it is also possible in pie charts, bar graphs etc etc 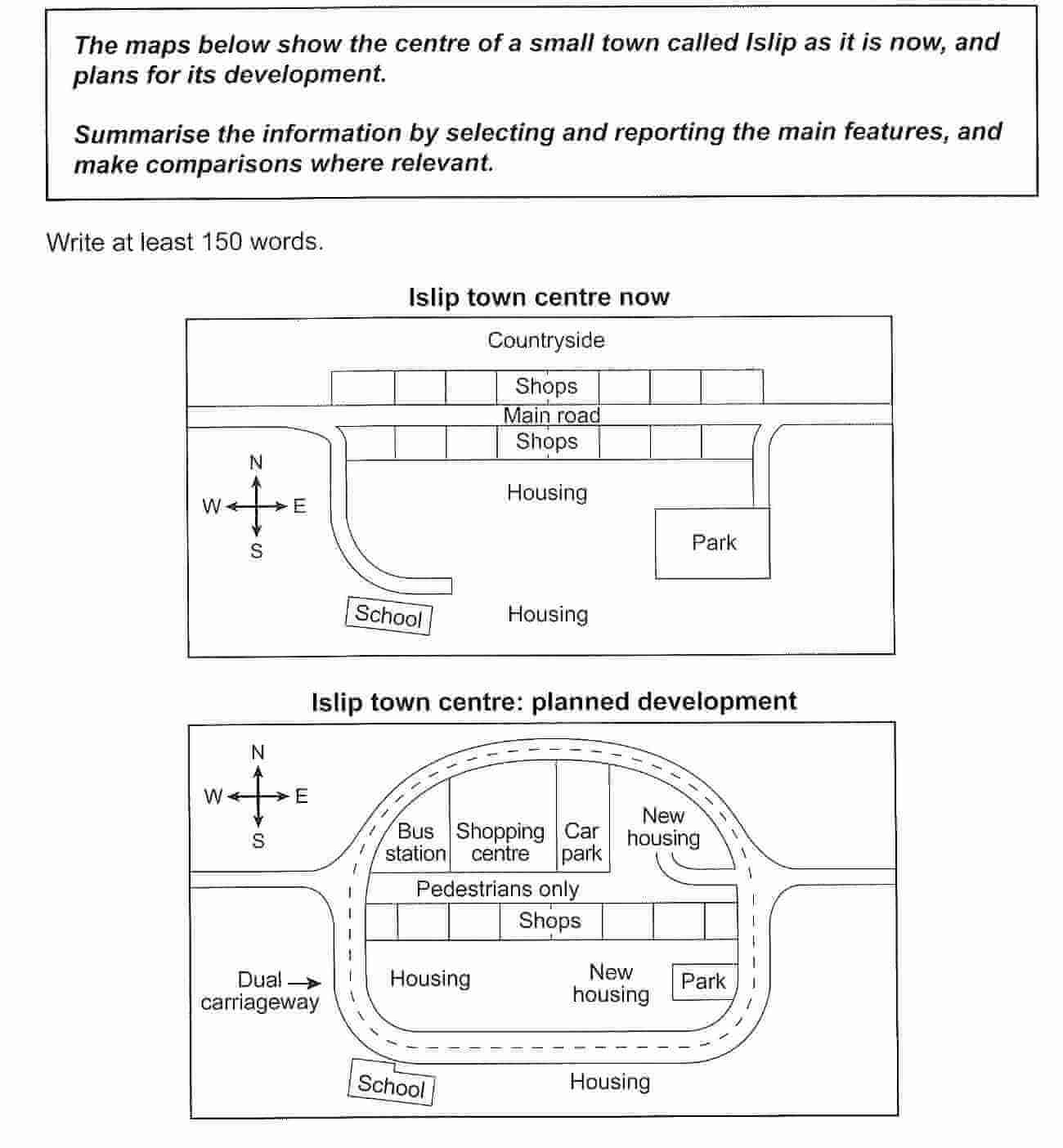 2 maps in the past:(going backwards in time)

2 maps in the past:(going forwards in time)

Subsequently this became...
Later this was transformed into…

A map in the present to an older map:

And now this has become…
Finally in the present time…

Currently the area has… but in the future this is planned to become… While the present town centre is … in plans for the future the area will later be used as...


FINAL EXAM TIP
Remember that you are ‘driving the bus’ and that in the IELTS there is a lot of value in organizing your ideas well, not only for the examiner’s actual checklist, but also because they will have a general feeling that you are in control, a great sign!

Thanks for your time, good luck in your studies and exams!
Adam