How to Start a Graph Question Answer in IELTS

Sometimes the hardest part of answering Task 1 graph questions in IELTS is just getting the answer started!

Don’t worry, here is a super simple plan you can follow every time you start a new time series graph question.

The best way to start a graph question in IELTS is to write a single sentence description of the graph itself and then a very short description, 1-2 sentences, of the general trend(s) of the graph line(s).

But actually if you follow a couple of simple sentence structures it is fairly easy to do without thinking.

So the introduction should include two main parts:


It is possible to not introduce the graph in this way, and that is fine. But first impressions do count and appearing well organized and informative from the very beginning is great!


How to Introduce a Time Series Graph

So as I said above, the introduction falls into two parts, a brief overview and then a short summary of the most important trend or trends.

The Overview: The Opening Sentence

The function of the very first part of a description is to clearly state what the graph is about.

The key idea here is to name what is being measured and to make sure that the reader is aware of the key indices that are being compared.

EXAM TIP
I say reader, and not examiner, because in the IELTS exam you have to imagine that the examiner is ‘pretending’ to be someone at university. They are testing you to see how well you would perform in an academic environment, not necessarily what level of English you have.

It is an exam that tests functional English in various situations within an academic environment.


In an IELTS exam I recommend starting with a very simple structure:

The graph shows (the change of X / the number of Y) in (Area Z) (preposition + time frame).

The graph shows the change in population in Country X (and Country Y) between the years 1999 and 2019.

The graph shows the number of cases of Disease A, Disease B and Disease C in the Area M for the last 20 months.

Remember: The technical name for these graphs are Time Series Graphs and as the name suggests the graph includes the passing of time, this could be minutes, hours, days or years.

The graph show the level of absorption of Chemical A and Chemical B in Oxygen over a period of 30 minutes.

Keep it as short, simple and direct as possible.

Exam tip:
Don’t panic if there are two graphs or multiple lines to introduce!
The amount of text you are required to write is still the same, so the answer will just mean you are less detailed in the comparison section (often the individual lines are simpler for this reason) but you are still required to organize your answer well.


The first graph shows the rate of smoking for both men and women in AreaQ in the last 10 years, while the second graph shows the changes in tobacco advertising in the same over area the last 25 years.

I would not personally recommend the longer form where you start mentioning what is on the vertical or x-axis and what is on the bottom or y-axis, because that might make the examiner feel you are just ‘padding’ out your answer with text that you have learned by heart.

padding:(here) extra words to make it appear longer
to learn by heart: to memorize word for word

Another bit of padding I would probably not recommend is to go into details about the units of measurement.

So I would avoid a longer introduction that is something like this:

This graph has on the vertical axis the number of cases of disease A, disease B and Disease C in Area M, and these are measured in millions. While on the horizontal axis we have each of the years from 1999 to 2009.

If you would like to mention the units briefly just change the standard opening sentence to:

The graph shows the number of cases in millions of Disease A, Disease B and Disease C in the Area M for the last 20 years.

Exam tip:
Try and not copy the exact title of the graph if possible. If you can’t think of a good phrase to use, then OK don’t worry too much, simply copy the title and just move on.


So as a formula:

The second sentence should be a very general sentence that describes an incredibly simplified version of the graph.

Exam tip:
Imagine describing the graph to someone who cannot see it and needs to draw the general trend from your words!

Maybe even imagine that you squint, or half-close, your eyes and have to tell someone what is the general idea of the information in the graph.

You have already given them the axes and now they have to sketch a line or two.

to squint:(here) to almost completely close your eyes
axes:(here) the plural of axis. (Yes, it is also the tool to chop wood!)

Remember this is a general trend. Don’t mention numbers.

Option 1 – All the Trends go in the Same Direction


Option 2 – The Direction of Trends are Different

It is not very common to have multiple lines (more than 3) so if there are just two and they are quite different then the lines can be individually mentioned by combining the ideas from Option 1.

As we can see the general trend of smoking in young people is rising while in old people it is staying fairly constant.


Option 3 – There are two stages to a graph’s trend

So here the line has maybe two different trends.

Be careful here because we are in the introduction paragraph and we want the language to be simple and not detailed. We will be detailed in the subsequent sections!

So we can use this:

Ideally for a time series graph I would aim to include a short general trend for each single line.


But what happens if there is no trend or if the graph is a mess?

If the lines are too complicated to describe vaguely then save your breath! Don’t try!

to save your breath: to save your energy, not do something because it is a waste of time/energy

But don’t say nothing!!!

It would be great if you can say something like this.

As we can see there are no general trends for all of the lines in the graph.


As we can see the changes in cases throughout the period do not show any general trend.


As we can see the changes in population during the period vary greatly/significantly and do not show a general trend.


As we can see the individual general trends of the age groups are numerous and should be looked at individually.
Exam Tip:

Don't think that such statements are bad!

This is a language exam. This question is testing you to see how you communicate data into information. And no discernible trend is very valid information. This is true for any of the Writing Paper Question 1 for IELTS.

Ok so that is the theory, lets have a look at some real questions from IELTS exams! 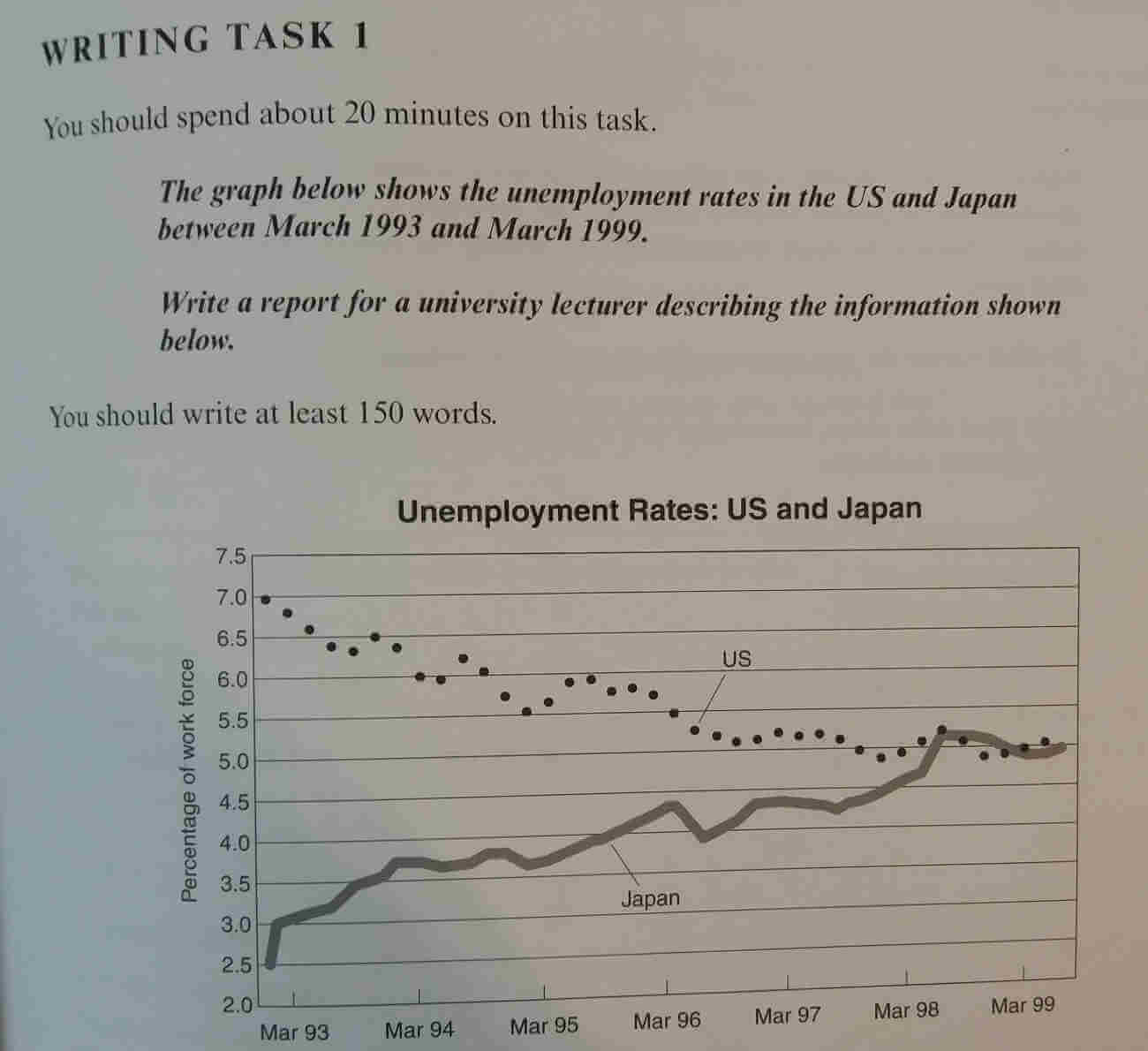 So using the formula:

The graph shows (the change of X / the number of Y) in (Area Z) (preposition + time frame).

The graph shows the change in unemployment rates in the USA and Japan between March 1993 and March 1999.


And now the trends:

As we can see from the graph, the unemployment level over this period in the US shows a general downward trend, while in Japan the percentage is rising steadily.


Exam Tip:
When describing graphs at the very beginning, we use the Present Tense because we are describing the graph (which is with us now) and not the data points in the past. After the introduction, it is very natural to start using the past when specific points on the line are being described. 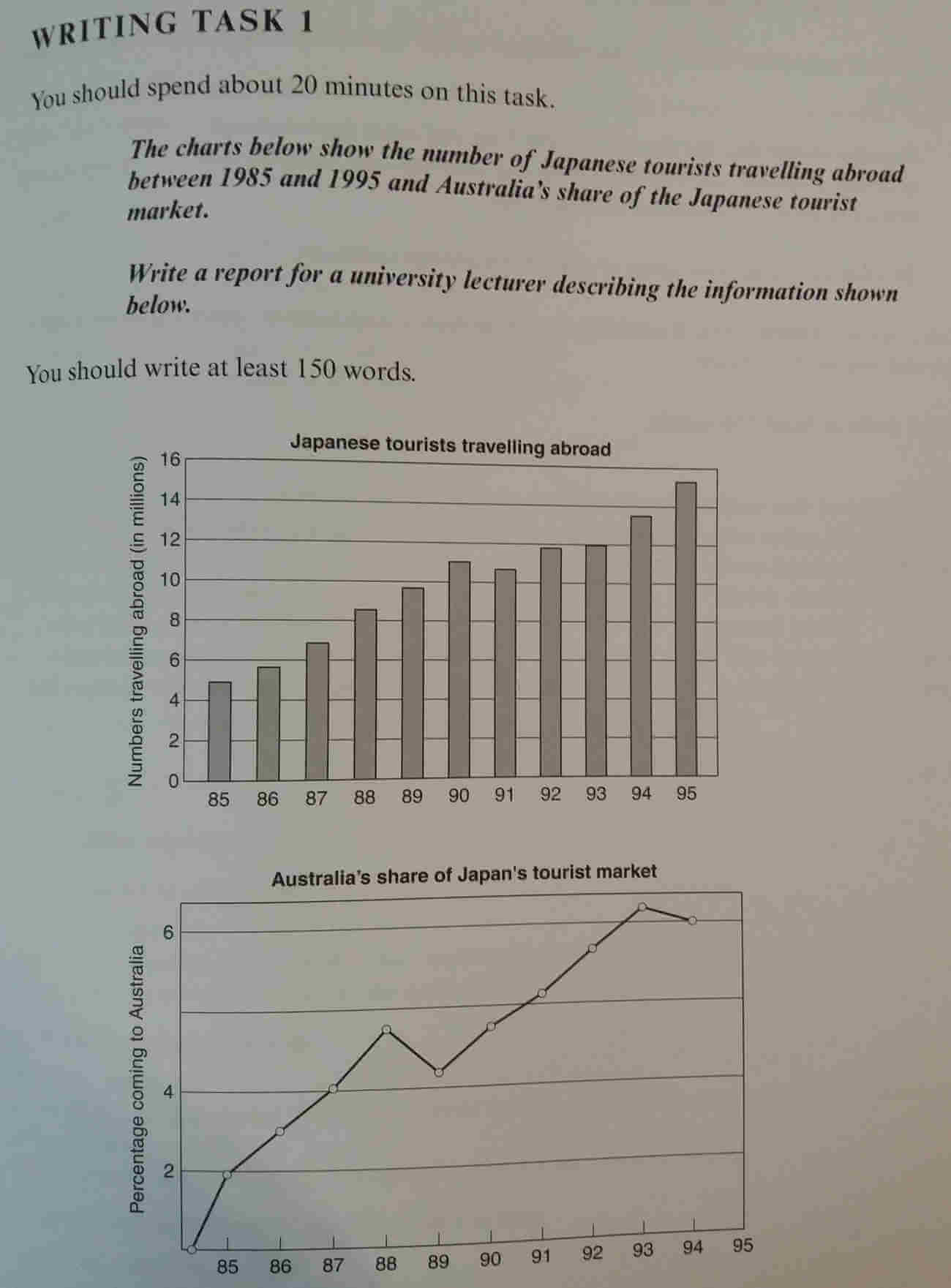 Here we see two graphs. The first one is a bar graph with time on the bottom axis. This is basically the same as a time series graph. Just imagine a line connecting the top of each bar!

So to give an overview

And now the eye squinting comparison:

*or have been rising steadily.

[For more options for any of the phrases I use here you can go to this page]
Final exam tip:
I do not recommend that students just learn phrases by heart, but, on the other hand, we do many many times repeat common structures when we talk and even more so when we write. So develop your own way of starting essays and answers and then go from there.

Hopefully, this has been a useful way to stop the “my mind’s gone blank” when you are faced with starting a writing task!

All the best in your studies and exams!